To use it, all you need to do is to set up the rules that it works with.

This tutorial shows the different features of this tool and how to get a smart assistant up and running for the campaigns.

The Bidder algorithm has two parts:

Note: To use automatic bidding, a campaign must have at least one goal set up (conversion tracking). However, you do not need to set up goals to use the rules algorithm. The tool works for both pixel and S2S tracking.

This feature automatically adjusts the CPM/CPC/CPV bids up or down according to the Target CPAs. The Bidder will also automatically blacklist ad zones that haven't converted when the maximum test budget is reached.

The bid will be optimized for each ad zone once one of the following has occured:

Insight: In the first scenario the automatic bidding might adjust the CPM price higher than the original bid set in the campaign. If the second scenario happens, then the bid might be too low according to the eCPA of the ad zone.

Note: Once the Automatic Bidder is initiated, the algorithm will use data generated from this period. As the campaign progresses through time, the bidder will only take data from the last 30 days. The algorithm will check data every 15 minutes for optimization. This will be displayed in the Bidder history, which is detailed later on in this tutorial.

Go to the Campaigns tab and click on Bidder. Then click New Bidding Algorithm to open the fields and create the automated bidding algorithm.

By default the Bidder is switched off, to open the Bidder fields first switch on the blue Bidder button.

You then define the following things:

You can assign the new bidding algorithm to an existing or new CPM/CPC/CPV or Smart CPM campaign by enabling the Bidder option in Step 4: Pricing & Limits and choosing the previously saved bidding algorithm from the drop-down menu.

This section shows how you can further optimize campaigns using the Bidder. This second feature works by creating rules to block ad zones. The rules set are based on Impressions, Spending, Clicks, CTR, Conversions or ROI.

Step 1:
Underneath the Bidding Algorithm created in part 1, The Rules edit section appears:

So in this example, we have created a rule that will trigger the algorithm when the ad zone has reached 10,000 impressions and the clicks generated are equal to zero.

A second rule reveals the same structure except for the insertion of an extra field before the operator field. This is because Conversions is selected in the third field. Conversions are always related to the Goal. Therefore the extra field features a drop-down menu of all the Goals, allowing you to select which Goal is the desired one to add to the Rule.

The algorithm will now block the ad zone if there are zero conversions out of 1,000 Clicks. The number of extra rules is unlimited, so you can keep adding more rules to the algorithm to further fine-tune the automation.

Note: Each rule will be applied on an OR basis and not an AND basis, which means that each rule is applied individually. Whichever of the set rules fulfils the condition first will be triggered and will block the ad zone.

Step 3:
Once all the desired rules are added you should click Update. Once you click Update your new algorithm will begin working. 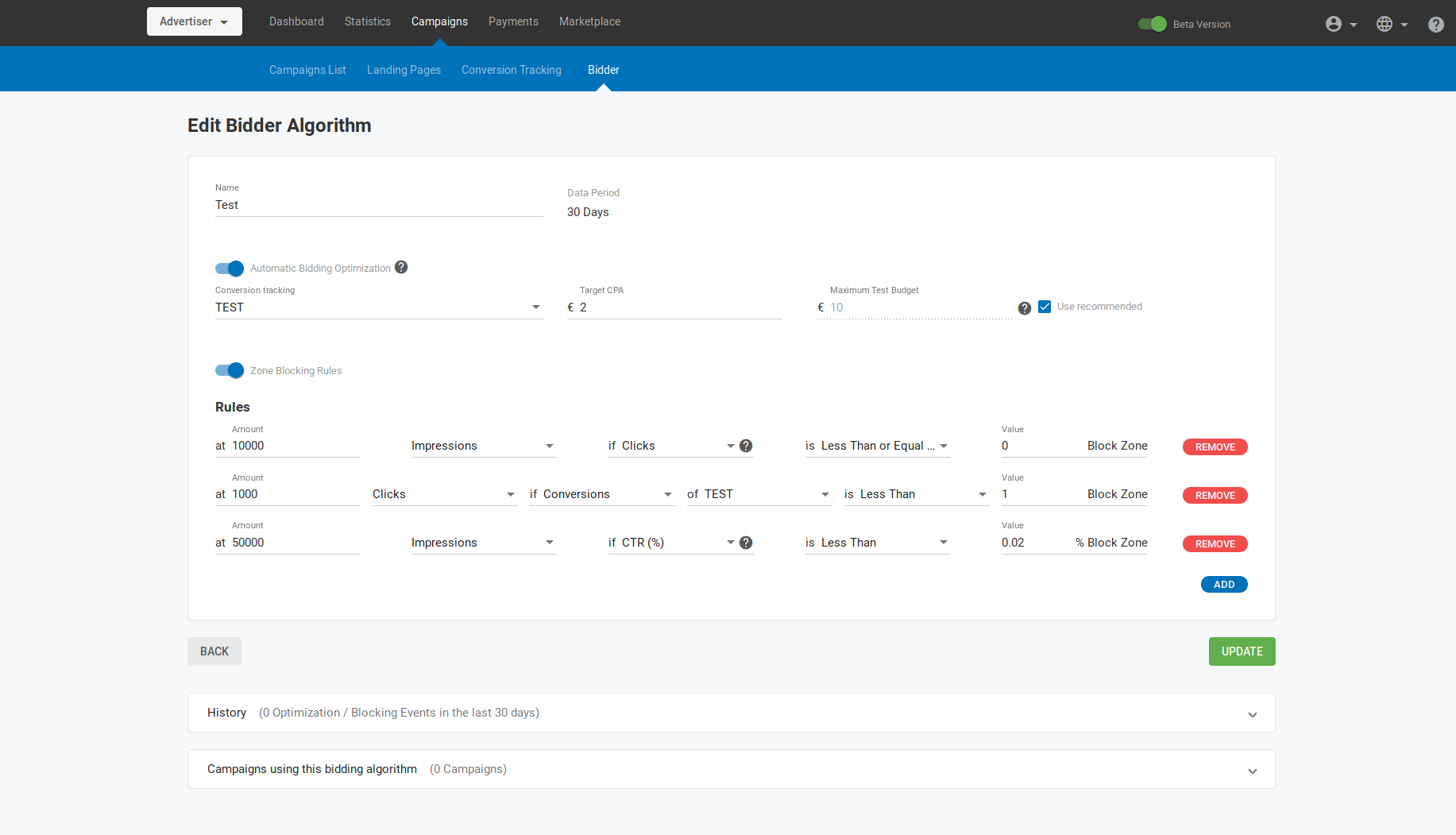 Campaigns Overview when using the Bidder

Below the Rules creation section, there are two links: History and Campaigns using this bidding algorithm.

This section shows a list of detailed information of all previously created campaigns set using a specific algorithm. This section shows any optimization events (such as increasing or lowering the bid) and blocking events that have occured over the last 30 days.

You can filter the results by date, or choose whether to see Optimized Bids or Blocked Zones. You can also search by Campaign Name, Id or Site/Zone Name or ID.

This shows a full list of all the campaigns using this specific bidding/rules algorithm. It will show Campaign ID, Campaign Name, and Type of ad format. On the left of this list, if you tick the boxes next to each campaign and click Remove selected, the specific algorithm will be removed from those selected campaigns.

As soon as an ad zone is blocked, it cannot be unblocked, and manual ad zone blocking is disabled (from the Statistics tab and from the Campaign tab).

When editing a campaign, it is not possible to change from one bidding algorithm to another, because it will erase all previous data and optimization. However, it is possible to keep refining the settings within the bidding algorithm already assigned to that campaign. This applies to the Automatic Bidder and the Rules algorithm.

Furthermore, it is not possible to re-use the results of the Bidder on another campaign because each campaign is optimized individually, so you need to start from scratch with the Bidder on a new campaign.

The Bidder is very flexible, so you can mix and match the disable options. You can:

If the algorithm is disabled in an existing campaign, the current optimization is saved. For example, imagine an algorithm that works for a week and has blocked sufficient ad zones. We might consider that it has done its job and we can now return to manual bidding. By disabling the bidding algorithm, all excluded zones remain blocked.

Note: Network Selection (All, RON, Premium, Members Areas) and Partner Networks settings can be used separately when using the bidder.

When targeting with the Bidder enabled, the maximum number of zones you can block in Step 5: Zones of creating a campaign is 4000.

The Bidder needs a minimum amount of data to start working, therefore: