As an Advertiser or Publisher, every time you choose a format for a campaign or an ad zone, you are making a strategic decision that affects your business. For Publishers, when they choose to put a certain format in one of their ad zones, they are essentially closing that ad zone to any other formats of ad that might show on it.

But what if it was possible to set up an ad zone that was open to displaying several different formats of ad? This would mean that the ad zone could be available to more campaigns, increase its chances of monetization, and make it more likely that there will always be a relevant ad to display in it.

This is the concept behind Multi-Format Ad Zones. The Publisher chooses existing zones and competes them against each other to appear in the Multi-Format Zone. For Banners, they can then set how the winner appears:

For Publishers, Multi-Ad zones get good eCPM rates and allow for a greater degree of control over an ad zone: They can choose two or more formats and configure how the ads look and feel in the zone.

With Banners, Publishers can:

With Natives, Publishers can choose from any of their existing Native ad zones and let them compete against each other for the highest bid, and only show the one that wins.

Similarly, Publishers can choose both Banner ads and Native ads, and let them compete against each other for the highest bid, showing only the one that wins. 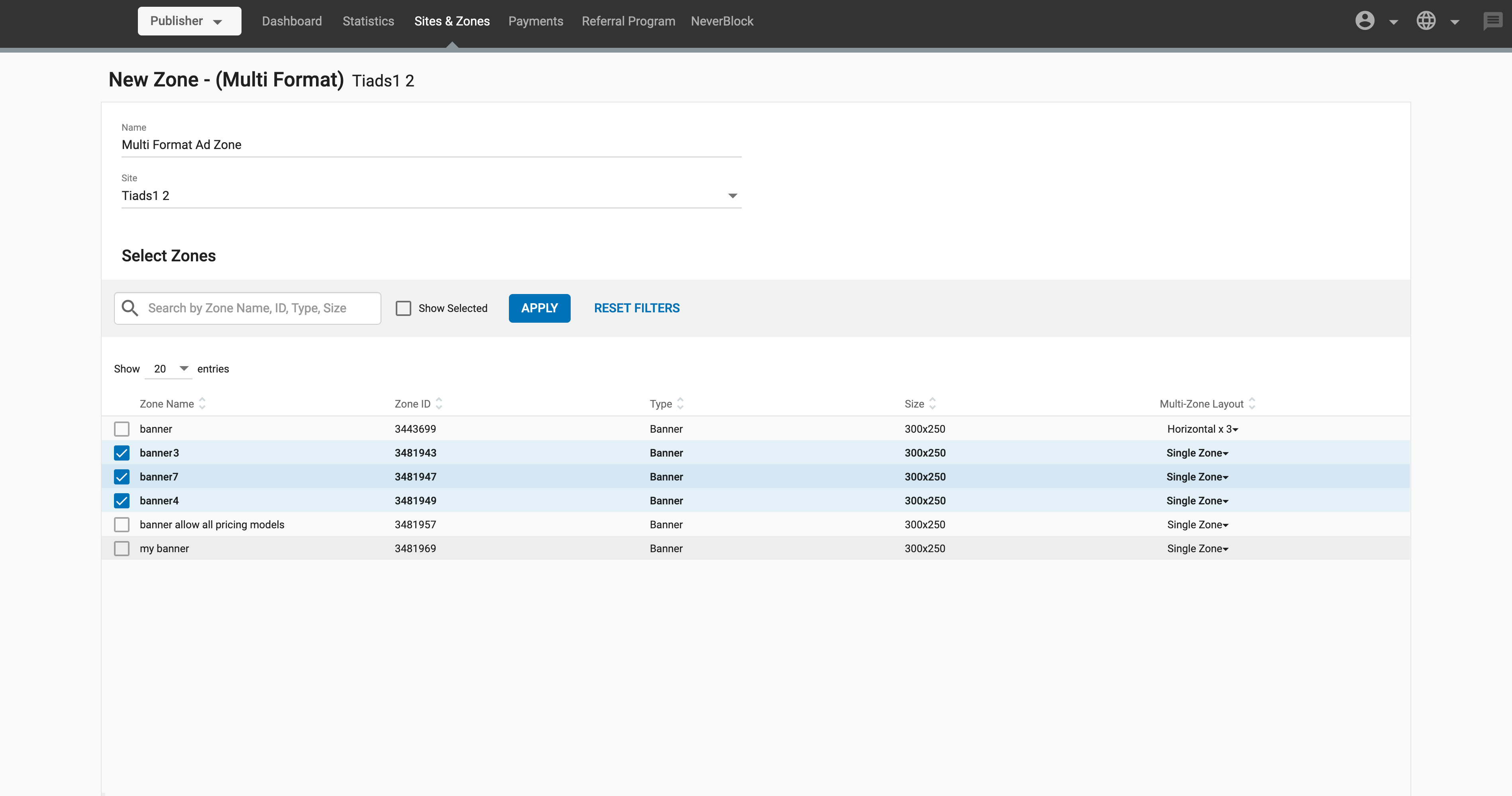 If the Publisher chooses Single Zone, they can choose multiple ad zones and the one with the highest eCPM bid will show once, as we have seen.

If choosing any of the other options, the Publisher chooses multiple ad zones, which compete against each other for the highest bid. The winner then shows in the chosen configuration:

The maximum size for a Multi-Format ad zone using banners is 1200 px (vertical or horizontal). So any Banner or combination of banners that are larger than that will not show. Native ads, however, can expand beyond 1200 px when necessary. 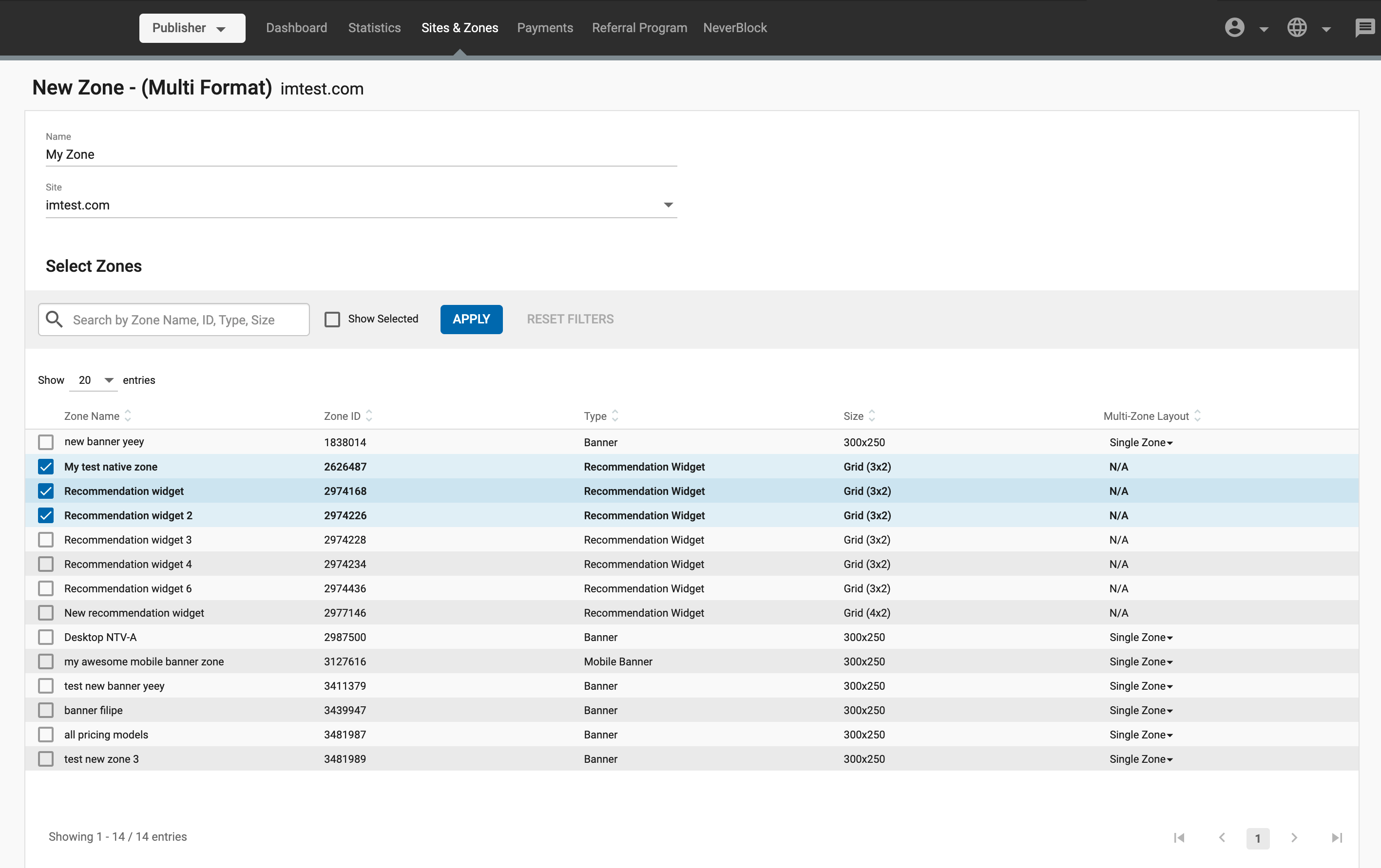 Native Ad Zones, however, can only be shown as a Single Zone. In this case, when the Publisher selects two or more Native ad zones to use in the Multi-Format ad zone, only one of them will actually display: The one that generates the highest eCPM value.

So as you can see, Multi-Format ad zones will open up a whole new world for both Advertisers and Publishers. You're no longer limited to one type of ad for each zone. This makes it more likely that ads will match with effective zones, and that zones will always have ads to display and achieve good bids for them.

Of course, this opens up all sorts of possibilities for Publishers, and various strategies present themselves once you get into using these types of zones. It can be an opportunity to reflect on how you might use these zones to fit in with your current strategy or try some new things.

There are not many people offering Multi-Format ad zones out there these days, so we’re proud to be one of the first to venture into this territory. We hope you can get a chance to try setting up a Multi-Format zone soon, there are all sorts of ways to get them to work for you!

Using Multi-Format ads can significantly increase your revenues, impressions, and ad spot bidding values. We carried out A/B testing with a well-known Publisher. The Publisher did four separate tests on 4 different ad placements:

For Variant A, the traffic was sent to the website’s original Banner ad zones.
For Variant B, the ad zone was changed to a Multi-Format ad placement.

The table below shows the difference between Multi-Format and Banner for each of the four ad placements:

As you can see, by exchanging normal Banner ad zones for Multi-Format ad zones this publisher increased revenue, eCPM, and eCPC values. Generally, CTRs improved as well. However, CTRs are dependent on the Advertiser’s creative/offer being compelling enough for the end-user to click on, and the usage of 3rd party tags for which we don’t count clicks.

“After seeing the success from these four Multi-Format ad zones, I will test with other ad placements across different devices. One of the key things for me is that the ad zone automatically resizes to fit the space whether it is a banner or native widget showing, which is great for user experience, plus I like the fact that because of the different formats, my site visitors don’t see the same ad over and over again, it shows them a variety of different ads which again is great for user experience.”